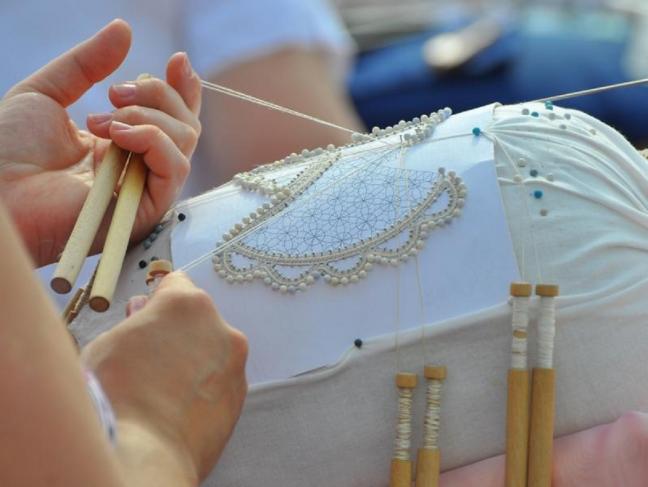 Vologda lace is a world famous brand. Vologda has been and is one of the recognized centers of lacemaking, treasuring age-old traditions of hand lacemaking.

The Vologda lace is distinguished by unique fluency of the pattern lines, the rhythmic repetition of motifs and rich pattern effect. When you see this lace, it elicits sounds of music in your soul. That's why, probably, Vologda lace is called "musical". And it is also known under the name "non-melting frost". The snow-white patterns of light thin lace create the winter fairy tale with snowflakes and thorny fir-trees under white fur. In one of S.G. Pisakhov's fairy tales, it is called a "frozen song".

Flax is the favorite material of the Vologda lace-makers. Whether unbleached, "severe", or snow-white, it is as shiny and elastic as real silk (that’s why it is often called "northern silk"). Flax lace is durable and beautiful.

The only lace museum in Russia was opened in Vologda in 2010. In 2015, the users of the TripAdvisor online service named it among top ten best Russian museums.

Once every three years VITA LACE Festival is held in Vologda. For the first time the festival invited guests in June 2010 and gathered representatives of lacemaking centers and flax mills from 18 different countries and 36 regions of Russia. "The most popular lacework" promo campaign was held among the festival events: 570 lace makers were simultaneously needlepointing for two hours at the site of the Vologda Kremlin. The action was included in the Russia Book of Records.

All-Russian competition of lacemaking masters "Serebryanaya koklyushka" (the Silver Bobbin) has been regularly held in Vologda since 2006.