The Vologda Region is located in the north of the European part of Russia, 465 km from Moscow and 658 km from St. Petersburg. The city of Vologda, founded in 1147, is the administrative center of the region. The region borders in the north on the Arkhangelsk region, in the east − on the Kirov region, in the south − on the Kostroma and Yaroslavl regions, in the southwest − on the Tver and Novgorod regions, in the west − on the Leningrad region and in the northwest on the Republic of Karelia. The region is divided into 26 districts and 2 urban districts (Vologda and Cherepovets). 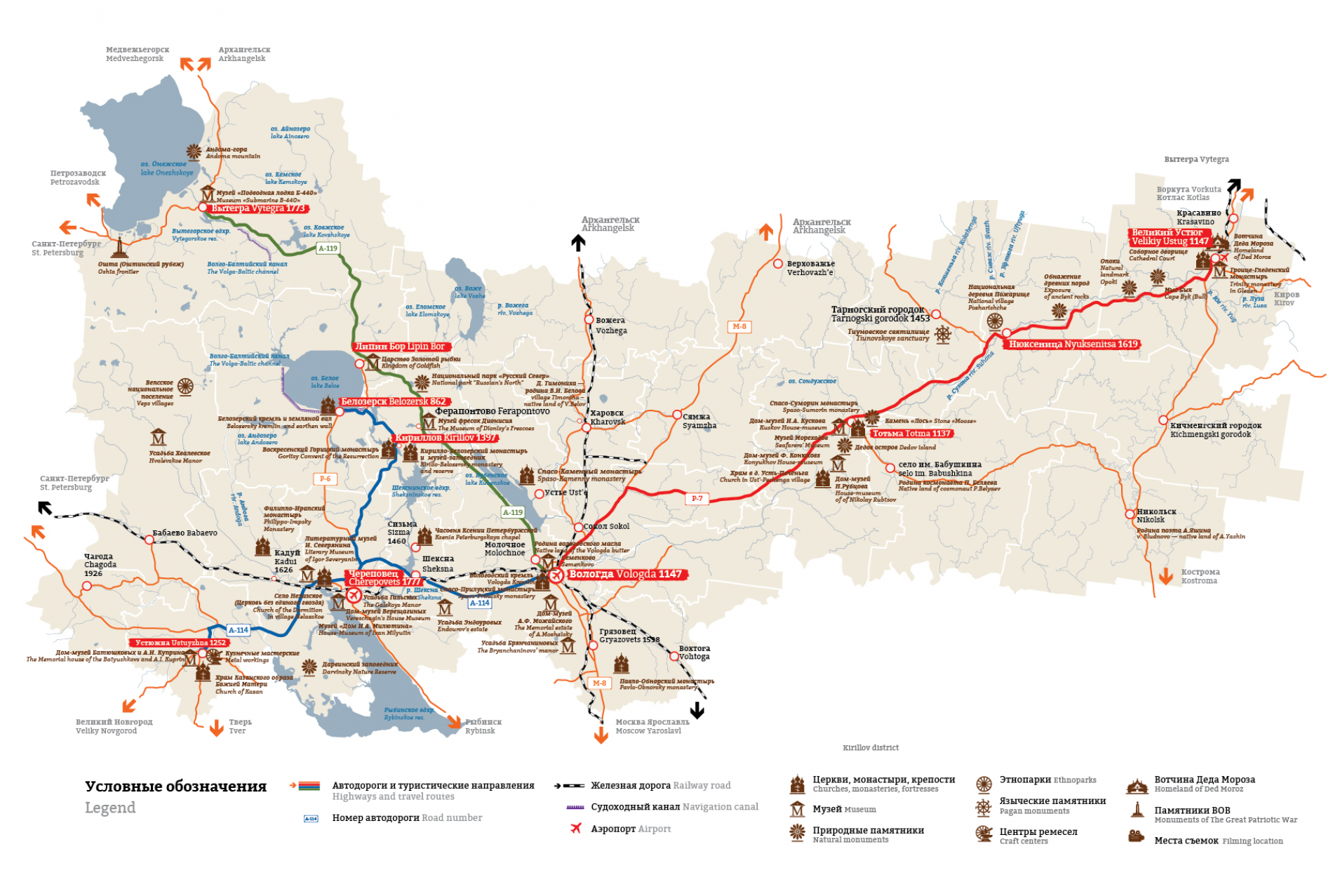 How to get to Vologda

You can get to Vologda by train: from Moscow (460 km) from Yaroslavsky Station by fast premium service train No. 060Я "Vologodskiye Zori" (the Vologda Dawns); from St. Petersburg by named train No. 617Я/618Я "Belye Nochi" (the White Nights) as well as by the transit trains going to Cherepovets, Arkhangelsk, Vorkuta, Labytnangi and the cities of the Komi Republic. Travel takes 9 to 14 hours.

You can get to Vologda by air. There is a flight connection between the airports of Vologda and St. Petersburg. The Cherepovets Airport, which in 1.5 hour drive from Vologda, regularly accommodates Severstal Airline flights from Moscow, St. Petersburg, Petrozavodsk, and Helsinki.

According to the "Expert-RA" rating agency, the Vologda region is one of the top ten regions of the Russian Federation in terms of tourist potential, and the city of Vologda ranks 4th in the Forbes rating of the best Russian cities for family holidays. It is the region of rich cultural and historical heritage. There are 777 historical and cultural monuments in the region, of which 218 are objects of federal importance.

Many historical places of the Vologda region are associated with the names of Ivan the Terrible, Peter the Great; the great saints: Cyril of White Lake, Ferapont, Pavel Obnorsky, Ignatius Bryanchaninov; writers and poets: K. Batyushkov, V. Gilyarovsky, I. Severyanin, N. Rubtsov.

The nature of the Vologda land is pure and life-giving, with many rivers and lakes. The forests of the region are rich with berries and mushrooms. There is a number of natural reserves here, among them Darwinian State Reserve and “Russkiy Sever” (the Russian North) National Park.

15 settlements of the region are favored with urban architectural ensembles and complexes of high artistic merit. Vologda, Belozersk, Kirillov, Ferapontovo, Totma, Ustyuzhna are among them. These places are very popular tourist sites.

Almost all cultural and historical tours traditionally start with Vologda, an ancient city located on the banks of the cognominal river. The history of Vologda, a cotemporary of Moscow, is an integral part of the most important events of the Russian history.